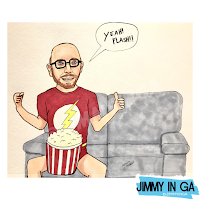 I sketched a goofy scene that Brian Austin Green kept describing, and now it is being used to try to help bring clean water to people around the world. Donate at http://generosity.withBAGpod.com.

I listen to podcast called "with BAG." FYI, some of the language is not family friendly. Brian Austin Green, aka B.A.G.) learned that his co-host Derek Russell watched The Flash. Since Brian considered it a children's show, he came up with the scenario of Derek sitting on the couch in his Flash Underoos, watching The Flash, eating popcorn, and yelling. After a few weeks of this being brought up, I sketch what he described. Several weeks later, Brian teased on the show that he was making t-shirts. He had 60 of them printed, and he is now using them to promote his fundraiser for generosity.org.

Generosity.org is a humanitarian organization dedicated to ending the clean water crisis in developing countries, one community at a time. They are a registered 501(c)3 non-profit organization, and 100% of donations are tax-deductible.


Thanks for watching! Please consider liking and sharing the video!