In "The Scorch Trials" Thomas (Dylan O'Brien), Minho (Ki Hong Lee), Teresa (Kaya Scodelario), and Newt (Thomas Brodie-Sangster) have escaped their maze.  However, as the audience knows from the ending of the first film, they are still entangled in the web of WCKD (World In Catastrophe: Killzone Experiment Department).

The Gladers, from first film, encounter new friends and new enemies in the sequel.  With the help of some of their new friends, they seek additional help to fight against WCKD.  One aspect of the movie that may be a surprise some moviegoers, unfamiliar with the books, are the Cranks.  This is a creepy addition to The Scorch Trials.

This second installment in the series has a lot of action, jump scares and some horrific elements.  In comparison to other dystopian teen future films sophomore releases, The Scorch Trials is superior to the Divergent Series, Insurgent, and to the Hunger Games: Catching Fire.

T.S. Nowlin wrote the screenplay adapation of James Dashner's second novel of The Maze Runner series.  He was also one of three co-writers of the first movie, in the series.

If you have not read the novels, you can listen to two Maze Runner novels for free.  If you're new to Audible, you can sign-up for a free trial that includes two free audio books, which could be The Maze Runner and The Scorch Trails.  Sign-up today to start listening.
Posted by Jimmy in GA at 2:54 PM 0 comments 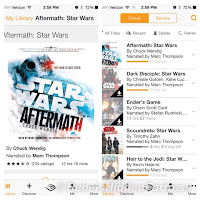 StarWars Aftermath by Chuck Wendig was released on 09/04/15.  Star Wars fans have had very high expectations for this title.  Many may not realize that this is the first book of a trilogy of books, which does make a difference.

As far as the novel goes, the first third of the book was slow. The second third was better and the final third was good.  The Empire's Rae Sloane who previously appeared in the novel "A New Dawn," was a bright spot in the novel.

The interludes showing glimpses of the Galaxy were more interesting than a lot of the main story.  There was a heavy focus on new characters made this book just little bit less accessible.

Overall, I give the story 3.5 Stars out of 5, and the performance by Marc Thompson 5 Stars our of 5.  He is fantastic in all of the audio books that I have listened to.

You can listen to this new Star Wars novel for free.  If you're new to Audible, you can sign-up for a free trial that includes two free audio books.  I would also recommend Dark Disciple or Lords of the Sith.  Sign-up today.
Posted by Jimmy in GA at 10:08 AM 0 comments