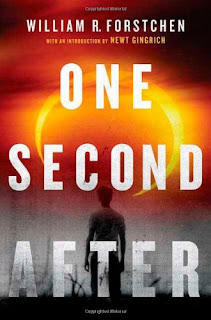 Just imagine what might happen if suddenly all electronics suddenly stopped working within the continental United States.  Chaos and most likely anarchy couldn't be too far behind.

"One Second After" by William R. Forstchen is a powerful story about Black Mountain, NC in the wake of an EMP attack against the United States.  The retired army colonel John Matherson helps his town pull together, as the world around them falls apart.  This is an emotional story, and it is frightening because it seems so plausible.

If you are new to the service, you can start an Audible.com Free Trial and get two free audio books!  Sign-up today to start listening for free.
Posted by Jimmy in GA at 10:07 AM 0 comments