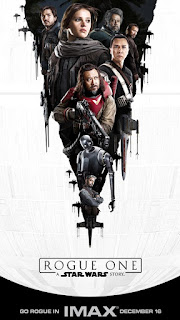 My article listed below was originally posted at RebelsHiddenFortress.com.

Rogue One: A Star Wars story came to theatres across the United States this evening.  Time will tell, but this may be the new gold standard for Star Wars films.

Many well informed fans, probably had some vague notions of what to expect in this journey into a galaxy far far away.  Trailers and TV spots revealed a few well known Star Wars characters were included in the film.  These characters had their moment and were highlights of the film. However, the new rebels attempting to steal the plans had their own story to tell, and it was a good one.

There was drama, tension, and humor, as well as, character development for each member of the Rogue One crew.  After seeing the film in IMAX 3D, I think this is the best Star Wars movie ever!

Rogue One story by John Knoll and Gary Whitta. It was directed by Gary Whitta.  Whitta has also been involved in Star Wars Rebels season three.  Elements from that series are hinted at in Rogue One, which is great for fans of Star Wars animation.


The film is based on the opening crawl of Star Wars: A New Hope.


"It is a period of civil war. Rebel spaceships, striking from a hidden base, have won their first victory against the evil Galactic Empire. During the battle, Rebel spies managed to steal secret plans to the Empire's ultimate weapon, the DEATH STAR, an armored space station with enough power to destroy an entire planet."