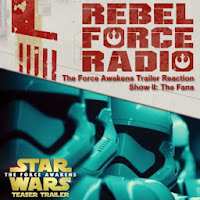 The Star Wars: The Force Awakens Trailer was released yesterday, and since then, Rebel Force Radio has already released two episodes of reactions and commentary.

The second episode released today featured Jimmy Mac's commentary and fan reactions.  I called and left a voice mail yesterday, after watching the trailer, and Jimmy Mac was nice enough to include my message beginning at 32:54 in the episode.
Posted by Jimmy in GA at 7:43 PM